Since Napoleon put a final end to the French Revolution, Paris has not generally been thought of as a place of great originality.

This past week has been exceptional.

I recently saw Lucy Kirkwood’s new play Mosquitoes at the National Theater in London. During the course of the play, a scientist at CERN’s Large Hadron Collider (a massive particle accelerator devoted to probing the origins of the universe) debates the nature of science and the universe with her anti-intellectual sister.

Kirkwood juxtaposes the imagined orderliness of the universe with the everyday disorder of human behavior. By approaching the topic through personal drama, Kirkwood avoids the conceptual tangle inevitable in comparing humanity to the vast system we call “the universe”. By the end of the play, it becomes clear that the universe is hardly as orderly, and human behavior is hardly as chaotic, as we might like to think. It turns out that in the randomness of human behavior, there may be some simple certainties that repeat themselves in every life in every era.

The benefit of this performance—elegantly staged and wonderfully acted—is that two age-old ideas are put in play in a new way. The hugeness of our universe is shrunk to a scale at which it is tantalizingly comprehensible and the unpredictability of humanity takes on a surprising order.

I came out of the play thinking we should all look more for the unexpected than the expected.

I hope it is something we can all achieve in today’s uncertain world.

One very bright friend responded, with the following, to my recent blog requesting readers’ questions directed to me:

There are so many lies and prevarications that blow-by-blow responses run the risk of getting lost in the endless noise. One “biggy” pinned down and blown back in the right way should have ten times the impact of ten boring fact-checks.

This may be the toughest question. One idea would be to gather a likeminded group, raise a budget to pay for signed and sponsored periodic LETTERS in your LOCAL community newspapers. Believe it or not Wi-Fi is now already so ubiquitous your words get lost in the ether. It is good to be thinking locally because such action has more impact and your names matter.

Like-minded people surround you—in the supermarket, on the streets—probably 7 out of 10 people you see in a day are like minded. Take a chance and sound them out. Yes, it does make a difference.

In my opinion throwing $ at most known names and institutions in DC is NOT the way to  have much effect. Those organizations, though they will deny it, are simply jumping with joy at the chance to grab a big haul for THEIR big thing. Make SURE they really will sing your song too. Who else? Tough question. Watch for messages you see from sources you can trust. Try them?

I am tempted to say to buy a baseball bat or some other weapon BUT that is not going to help and might hurt you if you find yourself in a riot. This needs to be done the right way with massive public sentiment which sooner or later finds its way into legitimate political behavior. Let your fingers do your walking as I do by writing a lot. Think of bumper stickers, lawn signs and as you spread them around you will feel a bit empowered!!

She went right to the heart of our problems today, and I fully accept her chastisement about my suggesting in a sample answer that we simply bite our tongues—an idea I originally intended to be tongue in cheek.

There is a lot to be said about all her questions.  More as time passes.

As a general proposition I would always be in agreement. At the moment one tends to pause and wonder what is funny about the predicament we are in.

Recently I enquired about questions my readers might have and got quite a number of interesting ideas. But the most interesting and frequent comment/question was “where is the humor today” –we need it very badly!

A very good question indeed! There is some, but generally it is pretty thin. 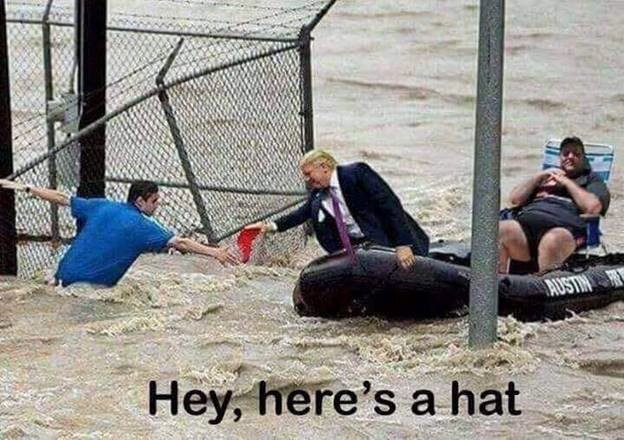 Clever that Photoshop process! And, is this a giggle or what?

My take away from this very good advice is that we all need to look for humor and share it widely.

We will all feel better about ourselves and the situation. And, perhaps score a point or two here and there.

I will do my bit –if I can – and I need your help spotting the better items.

And, the other questions will be addressed as we go along.

The debt ceiling requirement is more than just a technical matter. Failure to lift the ceiling could have terrible consequences. Still, it remains very important to do it to REMIND everybody, everywhere that we are paying attention and are conscious of the consequences.

Trump’s relations with “his party’s” leadership is so touchy and itchy that he did something quite surprising. He turned to his hated Democrat friends in Congress and did a pretty smart thing. He fixed the debt ceiling issue and on time. Kudos where it is due!

While that is certainly a good thing, it also worries me.

If Trump regularly plays ping pong BETWEEN the parties, there may be no limit to the damage he could do. Washington is so riddled with fear and ambition that our party leaders may be sorely tempted to turn on us so they can gain an inch or two here or there vs the other party in elections.

We have all been screaming about the ills of extreme partisanship and hoping the parties will talk and work together for the good of the country. Now that such a moment has come to pass, we should be pleased but cautious.

It should not take a lot of imagination to see what could be in store ahead. There are enough loose Democrat and Republican votes in both the House and Senate that if Trump plays his cards smartly he could do serious damage to the overall national interest in taxes, immigration, health care, infrastructure, and the budget.

We all know –I hope–that there is no single way to resolve each of those crucial issues. And, well thought-out compromises, openly discussed and arrived at will be essential.

The way forward will be to insist, up front, that all deliberations between the President and the Congress must be conducted with openness to enable our free press to get into the act early enough to get serious public input into the process and ensure no late, ugly surprises.

The recent healthcare debacle shows that these ‘deals’ cannot/should not be hashed out behind closed doors.

Yes, the free press is on our side most of the time.

So we must remain vigilant.

And while we are at it, we should keep our eyes open for some possible realignment of our political parties that could give greater weight and power to the overall national interests.

We need more and better GOVERNANCE than more GOVERNMENT.

I have had some suggestions that in addition to sending my thoughts out into the ether, I start answering questions my readers might have.

If, for example, you are bothered by Trump’s persistent use of blatant mistruths, you might wonder what could you think, say, and do about it. I think, for example, my answer to that might be “Bite your tongue, swallow hard and whisper ‘ugh!’”

At this point I have no idea what kinds of questions I might get and therefore I cannot predict what kind of replies I might have. I would certainly avoid, to the extent possible, obvious reactions, and—as I always do—try to see questions in a broad light and respond with wit and whatever wisdom I might have that could bring a new perspective to the question.

I have long avoided this idea, but finally I have concluded that there is little harm in giving it a try. I do not plan to stop my own periodic comments. If you see no more about this idea, it will be either because I got few questions worth repeating (anonymously, obviously) or I had no useful responses worth sharing with you.

Do not feel any obligation to responding to this, except if you think it a lousy idea, please say so!

Enter a topic to search my Archives: